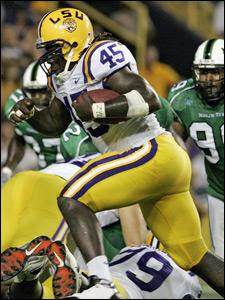 Quinn Johnson is a New Orleans native who has been playing at fullback for the Packers since he was drafted out of LSU in the 2009 NFL Draft. As the first player to be recruited off the LSU team since 1962, Quinn Johnson has made his school and family proud. Johnson officially signed on nearly eight months ago, and has already made an impression on the team.

Before becoming a Packer, Quinn Johnson was a fullback powerhouse on the football field with the Louisiana State University Tigers. Johnson is known for his blocking skills, earning him the privilege of playing forty games at LSU with 15 starts. Quinn Johnson is excited for the season to get underway this season, and you should expect to see great things from him and the rest of the Green Bay Packers team!
Posted by Hot for The Pack at 2:13 PM