Trevor Ford is ready to kick it in gear this season 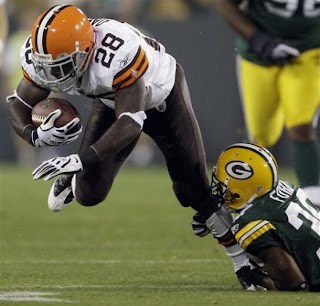 Trevor Ford is currently on the Green Bay Packers’ practice squad as a cornerback. Ford has not been on the team even a year yet, after being signed as a non-drafted free agent on May 4, 2009.

Anyone who knows Trevor Ford is well aware of his great skills on the field. Even as a senior on his powerhouse of a high school football team, Trevor was ranked at No. 6 cornerback in the nation by Rivals.com. Ford went on to earn first-team all-state honors and was chosen to participate in the 2004 CaliFlorida Bowl. After finishing his Florida State football career as a three-year letter winner, Trevor Ford decided to spend his final two seasons as a Troy Trojan. With the Trojans football team, Ford started all 13 games at cornerback and finished his last season strong in 2008.

Now with the Packers, Trevor Ford is determined to show that he has more talent than just to be on the Packers practice squad. Don’t miss out on Ford this season, because he is sure to blow you away.
Posted by Hot for The Pack at 9:29 AM