Al Harris is ready to go this season 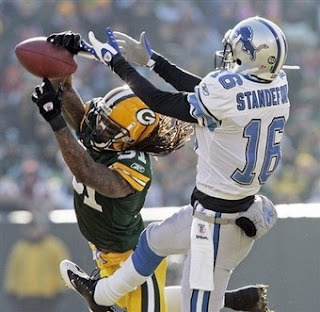 Al Harris is a Florida native who has made his way on to the Green Bay Packers as the starting cornerback. Harris is known for his hard-hitting style of play on the field. Nicknamed the “Dirty-One” by his opponents, you should expect a great show from Al Harris every time.

After leading his Trinity Valley Community College football team to the 1994 national championships, Al Harris transferred to Texas A&M University-Kingsville where he was the starting cornerback. With Texas A&M, Al Harris made first-team All-Lone Star Conference pick in 1996.

Upon graduation from Texas A&M, Al Harris was swooped up by the Philadelphia Eagles. As an immediate player for the Eagles, Harris was given his chance to shine in the NFL when he debuted against the Seattle Seahawks a week into his career.

Harris would be with the Philly Eagles until 2002, when he would be traded to the Green Bay Packers. With the Packers, Al Harris has shown to be a real spit fire and continues to go strong. Although his last season with the Packers was cut short with an ACL injury, Al Harris is ready to get back on the field and show the NFL that he’s still got it.
Posted by Hot for The Pack at 9:01 AM