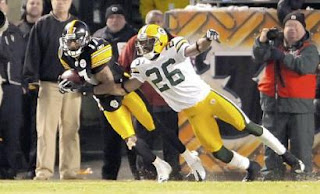 Have you heard of Josh Bell on the Green Bay Packers yet? Well you should. This California native, and Baylor graduate, has seen a lot in his two short years of football in the big league.

Josh Bell has been in the business of football since he was signed by the San Diego Chargers as an undrafted free agent in 2008. Unlucky for him, he was released later that year in August. Only a month later, Bell was picked up by the Denver Broncos and was signed to their practice squad. After being promoted to the active roster in October, Bell’s football career was looking up until he was put on the injured reserve about a year into his rookie season.

Since Josh Bell was out on commission, the Denver Broncos decided to reach an injury settlement and release him. Josh Bell received his third lucky break in the NFL last November when he was signed by the Green Bay Packers. The Packers had just lost Al Harris to a season ending injury, giving room for Josh Bell to jump on the Green Bay bandwagon.

Where will Josh Bell go next? Follow Josh Bell and the Green Bay Packers this season as they battle it out to prove they are indeed the best of the best.
Posted by Hot for The Pack at 8:48 AM