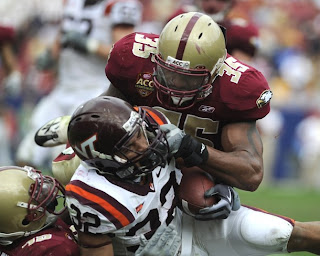 Robert Francois, at age 24, has already seen a lot of play on multiple football teams of every level. Francois is currently a linebacker for the Green Bay Packers, who he has played for since this past January.

Before joining the Packer roster, Robert Francois played college ball at Boston College, was signed on by the MN Vikings and did a short stint with the Detroit Lions as well. At Boston, Francois dominated from the beginning and never missed a game. In his last college football season, Robert had the privilege of leading his Boston College football team to the ACC Championship and to the Champs Sports Bowl victory.

Originally signed on as an undrafted free agent in 2009 by the MN Vikings, Francois was waived shortly after Brett Favre was signed to the team. Soon after, he was picked up by the Detroit Lions where he only stayed for 11 days. Finally, the Green Bay Packers gave Robert a glimmer of hope in the NFL by signing him to the practice squad in December. Francois is now a permanent player with the Green Bay Packers.
Posted by Hot for The Pack at 2:51 PM