DeShawn Wynn is ready to go 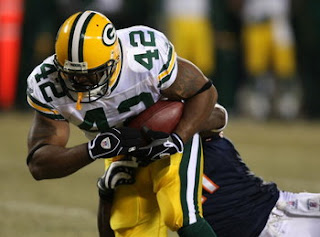 DeShawn Wynn is a 26 year old from Cincinnati, Ohio who has worked his way up the ranks to become a running back for the Green Bay Packers. Wynn was signed on by the Packers right out off his Florida college football team in the 2007 NFL Draft. At Florida, DeShawn Wynn spent the majority of his four years as the starting tailback, finishing his career with a 2007 BCS National Championship under his belt.

After being drafted by the Green Bay Packers, DeShawn Wynn scored his first two career touchdowns within his second week in the NFL. Unfortunately, later in the season Wynn injured his shoulder and was put on the injured reserve for the rest of the season. Wynn would be later released and re-signed by the Packers practice squad where he remained only a month.

DeShawn Wynn knows he does not belong on the practice squad and is determined to prove that to his team this season. Don’t miss a Green Bay Packers game this year, because Wynn and the rest of the Packer players are bringing everything they’ve got.
Posted by Hot for The Pack at 2:51 PM