Ahman Green comes back to the Pack 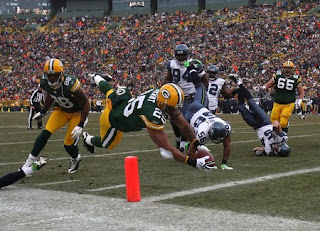 Ahman Green is a Nebraska native and is currently a running back for the Packers. Green was originally drafted by the Seattle Seahawks in the 1998 NFL Draft right out off the University of Nebraska football team. After becoming a four-time Pro Bowl selection with the Packers and finally joining the Green Bay Packers, Ahman Green would play for the Houston Texas before rejoining the Packers.

Green was a star player for the Nebraska Cornhuskers as the running back, leading the team to two national championships. Upon graduation, Green was swooped up by the Seahawks but was overshadowed by established veteran, Ricky Watters. Green was traded to the Packers in 2000 where he went on to break several franchise records. After not getting enough play time and joining the Houston Texas for a four-year contract, Green eventually decided to return to the Packers this past October.
Posted by Hot for The Pack at 2:41 PM