It may be August, but flip the calendar ahead to 2013 and get ready to party on February 17th.  According to Kansas Governor Sam Brownbac, February 17th will henceforth be better known as the official Jordy Nelson Day statewide!  Yee-haw!

This got the ol' wheels turning about how to celebrate Jordy Nelson Day in my own life.  Here are a few options.

1.  Peruse the internet for Jordy Nelson video clips.  There are plenty!

I'll probably stick with option one on February 17th.  How about you--any other creative ways to celebrate this memorable event?

Alrighty, folks.  I need to be honest.  If pressed, I must declare that Green Bay Packers football player Jarrett Bush is the finest guy on the team.  Here's proof. 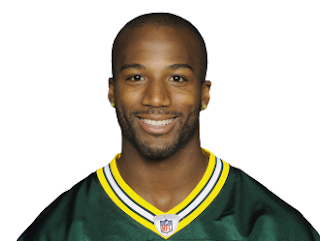 The warm smile!  The muscular bod (or at least, neck and shoulders in this photo)!  The eyes!

I'm not sure what's better: his Green Bay Packers bio which lists him as officially single OR the fact he plays three instruments (trombone, tuba, drums).  Be still my heart.

Can't wait for the season to get underway very soon and I can watch Jarrett Bush back in action on the the field.  Gooooooo Green Bay Packers!
Posted by Hot for The Pack at 7:15 AM No comments:

Duane Bennett is known in Minnesota for his sweet plays with the Minnesota Golden Gophers.  During his time on the college team, Duane Bennett captured attention nationwide, particularly for this cool 96 yard kickoff return versus....who else?....the Wisconsin Badgers!

Who knew that months later he would be drafted by the Green Bay Packers?

Though he's a young guy, he's already made himself known throughout the midwest.  He grew up in Illinois and graduated from high school in 2007 after a stand-out career.  Soon enough, he'll be known nationwide and we'll all be chanting his name at Green Bay Packers football games!  Go Duane!
Posted by Hot for The Pack at 7:02 PM No comments:

Aaron Rodgers keeps up his Twitter feed pretty regularly...about every other day or so.  He's accumulated an impressive number of followers, averaging into the six digits.  A few of my top Aaron Rodgers tweets include this one from the summer:

Another favorite of mine goes a couple months back when he posted a few Jack Handy insights: 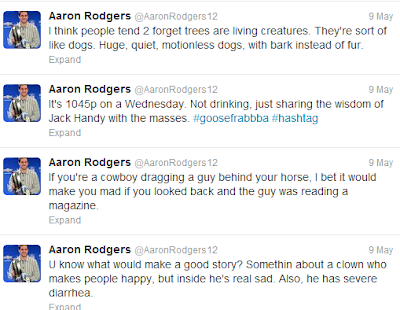 It's always fun to get a glimpse into each Green Bay Packers player sense of humor and personality and I think these give us a bit of Aaron Rodgers...especially on May 9th when he apparently didn't have much else going on!

One thing I've noticed about NFL players over the years is that they take themselves pretty seriously.  Game day is a time for serious expressions and some trash talking.  Officials get an earful if they make a controversial call for the other team and coaches especially like to get good and angry on a weekly basis.

The truth, though, is that these guys need to realize two things:

A spot on the Green Bay Packers roster is the stuff of dreams for many guys across the country.  These men are living the dream.  Therefore, I always smile when I see pictures of Jerron McMilian looking like he's having an absolute blast on the field.  Case in point:

He gets paid to work out and compete a few months a year.  It's amazing and Jerron McMillian seems to appreciate his well-deserved success.  Maybe this season we'll see some more smiles out there on Lambeau Field; in the meantime we have Jerron McMillian!
Posted by Hot for The Pack at 8:19 AM No comments:

I just updated about Alex Green, but needed to revisit him another time for this post.  After doing a little online research, I found out that Alex Green may be a single guy, but he has a little family all his own.  Alex Green makes his home in Portland, Oregon and shares his time with his daughter, Harlym, three years old and his son, Kingston, one.

Alex Green....now what kind of father would he be?  Is he a pushover whose kids can stay up past their bedtime or eat dessert for dinner?  Or does he run a tight ship with strict rules and consequences?  I'd love to get a sneak peek into his time with his little ones to see just what kind of dad he is.  Knowing Alex Green's speed and finesse on the football field, I'm sure that playtime at his house involves plenty of ball kicking and throwing.  Fun times with some mini Green Bay Packers fans!

We all know and love Charles Woodson for his onfield performances, but it's his off-field work that has me liking the guy even more.  Charles Woodson started his own foundation (you can view his official online page here) and he's making a difference in the lives of people all over the country. 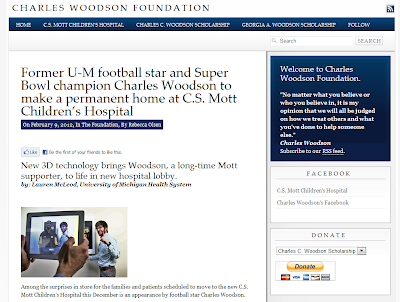 So check our Charles Woodson's charity work today.  He's yet another stellar Green Bay Packer player!
Posted by Hot for The Pack at 3:04 PM No comments:

Alex Green at the University of Hawaii

Hawaii is a honeymoon destination and hot vacation spot for the young and old alike.  But can you imagine going there to do serious studying?  How about playing a focused college sport in the tropical heat?  That's exactly what Green Bay Packers running back Alex Green opted to do for his college experience at the University of Hawaii.  Wow!

The University of Hawaii is a huge entity with seven community colleges and three university sites under its huge umbrella.  The school set up shop in 1907 and has served people all the way from associates to doctoral students.

Alex Green did well on the University of Hawaii football team and we're happy that he changed up his deep Hawaiian green jersey for that of a sharp green of the Green Bay Packers!
Posted by Hot for The Pack at 10:29 AM No comments:

Green Bay Packers player Diondre Borel hails from San Jose, California.  Does he look like a Californian to you?

Let's take a look at Diondre Borel's hometown.  Here are a few facts about San Jose:

1. It's the 3rd largest city in all of California.

It's always interesting to see where our beloved Green Bay Packers call home.  As for Diondre Borel, you can find him in California in the off-season, enjoying that warm sunshine and the palms.
Posted by Hot for The Pack at 8:19 PM No comments:

In the picture above, Mason Crosby is flashing more than a skeptical glance at reporters gathered around.  He's also showing off his close-cropped beard.

I'm not sure what to think.  Is this just Exhibit A of someone who skipped a few shaves?  Or is this an intentional grooming job with an electric razor?

The first theory means he's a laid-back guy who isn't going to let a professional NFL game dictate his shaving routine.  The second means he's a precise man with firm attention to detail.  These are important defining personality traits...all summed up in the beard approach!

Clue #1 lies in his sideburns, which are carefully cropped.  Clue #2 is in the eyebrows which are also defined.  In the end, I'm going with his beard-as-intentional-choice.  What about you?
Posted by Hot for The Pack at 9:12 AM No comments:

One of the 90s kids....Green Bay Packers player Randall Cobb

Well, guys, it's happening.  The NFL is now home to players like Green Bay Packers' Randall Cobb who were born in the 90s.  In fact, Randall Cobb has the distinction of being the FIRST 90's baby to play in an NFL game.

Randall Cobb was just 9 when our country faced Y2K, probably doesn't remember days before the internet and cell phones, and is a part of generation Y.  We'll see what his youthfulness does for the Green Bay Packers this season!
Posted by Hot for The Pack at 8:06 AM No comments:

What if Randy Moss and Dale Moss were brothers?

Watch out, NFL!  There's another Moss on the field.


Unlike Randy Moss, though, Dale Moss is still very new to football.  He focused on basketball throughout his sports career, playing four years for the South Dakota Jackrabbits and doing very well.  It wasn't until 2011 that he played for the football team and competed in 11 games.  On just that basis, Dale Moss was scooped up by the Green Bay Packers.  Nothing like a brief resume to get someone noticed!

What advice would Randy give to a fellow Moss man about succeeding in the NFL?
Posted by Hot for The Pack at 8:31 AM 10 comments:

Celebrating the 4th with Shaky Smithson


After the parade, I'm thinking a big 4th of July BBQ would be perfect, especially if fellow Green Bay Packers players and family would be in attendance.  Maybe a game of pick-up football would be a good way to celebrate, too.  And no 4th of July is complete without a dazzling fireworks display...preferably all in Green Bay Packers colors! It's just that, well, for a moment, I had you confused with my elderly grandfather. 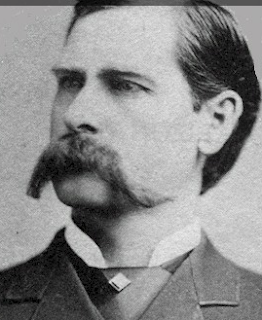 Thanks.
Posted by Hot for The Pack at 8:18 AM No comments: