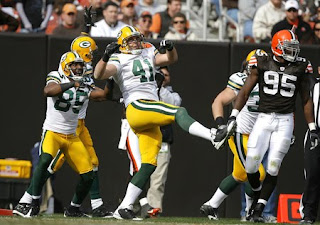 Spencer Havner, otherwise known as “Duct Tape,” is a tight end and linebacker for the Green Bay Packers. Havner was given the quirky nickname as a joke for the numerous roles he plays on the Packers’ team.

Havner originally signed on as an undrafted free agent with the Washington Redskins when he graduated from UCLA in 2006. At UCLA, Spencer Havner was a four year starter and accumulated a few major achievements, such as earning First-team All-America and leading his team to the 2005 Sun Bowl victory.

After being let go by the Washington Redskins, Spencer Havner was picked up by the Packers in the middle of the 2006 NFL season. Havner was put on the practice squad, released and then re-signed by the team. In 2009, Havner finally made the opening foster after he switched positions from linebacker to tight end. Now that he has found his niche on the team, you can expect to see great things from Spencer Havner and the Green Bay Packers football team this next season.