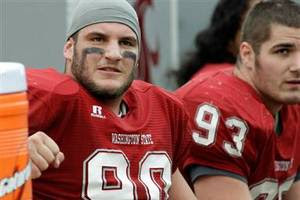 Devin Frischknecht is a fresh recruit for the Green Bay Packers. Frischknecht signed on with the Packers as a non-drafted free agent in June of last year, and had just finished his stint on the football team. While finishing his last two seasons with , Devin Frischknecht saw a lot of play time and appeared in ten games as a tight end.

Before joining the ranks of the football team, Devin led his to an 11-1 record, a Western State Football League title and to the final year-end ranking of No. 2. Devin knew he needed to prove himself at a higher level in order to continue his football career after college, so he joined on with after his sophomore year. Those of you who are familiar with Frischknecht probably don’t know that he used to be a turkey farmer in as a kid. What a step up he has taken.