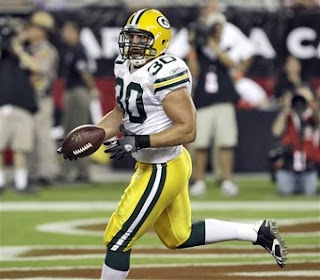 John Kuhn is the fullback for the Green Bay Packers, but was originally signed by the Pittsburgh Steelers in 2005 as an undrafted free agent.

Before joining the Steelers, John Kuhn was a Shippensburg University football player. At Shippensburg, he was definitely noticed by fans and coaches alike. Among others, Kuhn was selected to play in the 2005 Whataburger Cactus Bowl as a Division II all-star for the North team, as well as being named PSAC Western Division Offensive Player of the Year in 2003. John Kuhn also holds 27 school records and six PSAC records. These accomplishments definitely gave him a leg up when he decided to continue his football career into the NFL.

After being signed to the Pittsburgh Steelers, Kuhn earned a Super Bowl ring as a member of the Steelers’ practice squad in Super Bowl XL. There were a few ups and downs to John Kuhn’s career in the first couple of years with the Pittsburgh Steelers. Eventually, after being released by the Steelers, Kuhn was signed to the active roster of the Green Bay Packers.
Posted by Hot for The Pack at 4:48 PM