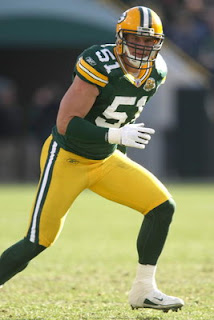 Brady Poppinga has been with the Green Bay Packers since 2005. Two years into his time with the Packers, Poppinga was awarded the 2007 winner of the Walter Payton Man of the Year Award for his contributions to humanitarianism and for his performance with the Packers.

With a huge dedication to charities and organizations directed to improve the community, such as Boy Scouts of America and church activities, Brady Poppinga is a man to look up to. Poppinga has also hosted a football camp for children in his home state of Wyoming as a fundraiser for the Children’s Hospital. Brady Poppinga’s list of contributions is quite extensive, and even longer than his list of achievements on the football field.

After graduating Brigham Young College and being drafted by the Packers, dominated the field with skill and speed. Poppinga is no where near finished with his attempts to improve the community and to improve his football skills. Don’t miss out on the next Green Bay Packers’ game to watch Brady and the rest of the Pack in action!
Posted by Hot for The Pack at 3:19 PM