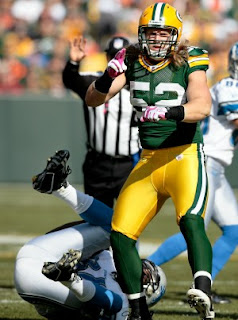 Clay Matthews, a California native, has been playing football since he was a kid. Matthews left his Agoura High School with an All-CIF first-team honors and a four-year letter under his belt. With a father who played in the NFL for 19 seasons, a grandfather who played with the 49ers and a few other family members in the football circle, football is in Clay Matthew’s blood.

After high school, Matthews joined on with the Southern California football team. Clay Matthews only sat out one game in his entire college football career, which was the first game of his first regular season. Over his four years at USC, Clay earned multiple awards, served as a key special-teams contributor and won USC’s Co-Special Teams Player of the Year Award three times. Clay also played in four straight Rose Bowls and the 2009 Senior Bowl.

Clay is well known for his skill and versatility on the football field. Upon graduation, a few NFL teams fought for the right to sign Clay Matthews with the Green Bay Packers coming out on top. Matthews became the first linebacker ever picked from USC by the Packers in the first round draft. When Matthews debuted with the Packers, his family became the second with three generations of NFL players. Don’t miss out on a Green Bay Packers game!
Posted by Hot for The Pack at 8:44 AM