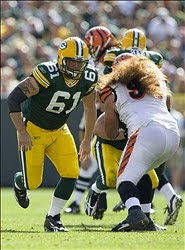 Brett Goode, a long snapper for the Green Bay Packers, is from the great state of Arkansas. Goode was originally signed as an undrafted free agent in 2007 by the Jackson Jaguars right after he graduated from the University of Arkansas. With Arkansas, Brett Good was a four-year letter winner for the Razorbacks and appeared in 49 games over the seasons. Near the end of 2008, Goode was signed by Green Bay.

The Green Bay Packers are thrilled to have Brett Goode on there team, due to his reliability and consistent flawless performance. Goode was a last-minute replacement to JJ Jansen after the 2008 preseason and proved to be a pleasantly surprising player the entire season.
Posted by Hot for The Pack at 8:55 AM