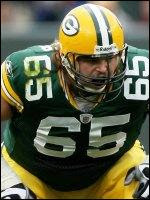 Mark Tauscher, a Wisconsin-native, is proud to be apart of the Green Bay Packers football team. As an offensive tackle for the Packers, Tauscher was originally drafted off his Wisconsin Badgers football team in the 2000 NFL Draft.

Tauscher made his Wisconsin Badgers football team in1995, and didn’t see much action in the first two years. In his junior year at Wisconsin, Tauscher was given his time to shine when he became a starter at right tackle and contributed a great deal as a blocker.

After joining the Green Bay Packers in 2000, Mark Tauscher’s rookie year went smoothly. Tauscher became a starter early in the season, but was injured soon after. When he returned the next season, Tauscher was put right back onto the starting lineup for the Green Bay Packers until he was put on the injured list again.
Tauscher would soon recover and go strong into the 2008 Packers season, when he won the Packers’ 2008 Walter Payton Man of the Year and was voted Packers’ 2008 Ed Block Courage Award winner. Mark has once again signed on with Green Bay as of last month.
Posted by Hot for The Pack at 1:04 PM