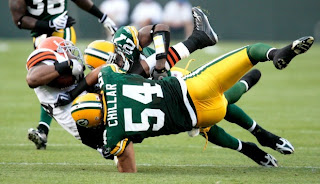 Many NFL football players seem to come out of California and Brandon Chillar is no exception. Born in Los Angeles, Chillar grew up in a small town near San Diego where he was a football star. After graduating high school, Chillar went on to play for the University of California Bruins football team. This Pac-10 school gained Brandon huge recognition. Over his four seasons, Chillar earned First-team All-Pack-10 and led his team in multiple career-highs.

Upon graduation from UCLA, Chillar was snatched up by the St. Louis Rams in the fourth-round draft pick in the 2004 NFL Draft. Brandon Chillar signed a four year contract with the Rams and soon proved to his teammates that he belonged in the big leagues. After the four years, Chillar decided to sign on with the Green Bay Packers for over three times as much as what was offered by the Rams in his first season.

Brandon Chillar proved to be a force on the field, provoking the Packers to offer another four-year contract for $21 million which, of course, he took immediately. Brandon Chillar loves playing with the Green Bay Packers and is here to stay.
Posted by Hot for The Pack at 9:25 AM