Fresh to the team: Stanley Daniels 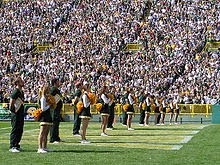 With a run of football players in his family, such as his uncle who played 13 years in the NFL, Stanley Daniels was meant to play the game. Since he was a kid, Stanley Daniels has been an outstanding guard.

As a Washington Huskies football player, Stanley Daniels captured the attention of his team and competition alike. Daniels earned Sun “Super 11” honorable mention, was a member of the Tacoma News-Tribune’s “Western 100,” as well as the CIF-San Diego Section first-team defensive honors.