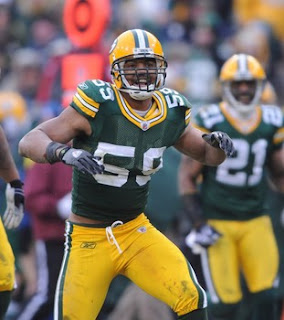 Brad Jones, a linebacker from , was plucked out off his Colorado Buffaloes football team by the Packers in the 2009 NFL Draft. As a seventh round pick in the draft, Brad Jones is now a starting outside linebacker for the Packers.

Even in his high school years, Brad Jones was a captain and MVP for his football team. Jones was also a First-team All-State selection and All-state Dream Team performer by the Detroit Free Press. Brad Jones’ many achievements during his high school football career gained him much recognition by the Colorado Buffaloes, who brought him full-heartedly onto the team after graduation.

After being redshirted as a freshman to build his abilities to a college-level, Brad Jones was given the nod to play in every football game until he graduated from . Over his college career, Jones earned his spot on numerous Bowl game lineups and the Defensive Player of the Year award as a senior. These achievements gained Brad Jones the Packer’s recognition and he hasn’t let them down yet.