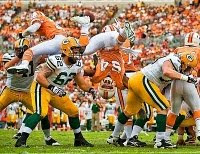 Evan Dietrich-Smith is a phenomenal offensive lineman who was signed by the Green Bay Packers on May 1, 2009 as a non-drafted free agent.

Idaho State was sad to see Dietrich-Smith leave after his four years as an offensive lineman, whom had started 44 games over the seasons. This was an Idaho State school record for the most starts ever by an offense player. Evan Dietrich-Smith left Idaho State with a four-time honorable mention all-conference honors, MVP honors and the ISU Lifter of the Year Award under his belt. Evan also won the “Golden Helmet Award” while a Salinas High School football player.

The Idaho State Bengals may have lost a great player, but the Green Bay Packers definitely gained one. You can be sure to see the name Evan Dietrich-Smith a whole lot more this coming season. Go Packers!
Posted by Hot for The Pack at 9:10 AM