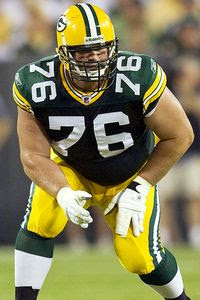 Chad Clifton, an offensive tackle for the Green Bay Packers, has been with the team for almost eleven seasons! Originally drafted in the 2000 NFL Draft out off his football team, Chad Clifton never expected to have as much success as he has had with the Packers.

As a rookie, he took over the starting left tackle position and quickly became one of the NFL’s best blindside blockers. Besides a few injuries along the way, has continued to produce results on the Green Bay Packers football team.

When he isn’t playing football, is hanging out with his wife and two kids as well getting involved in the community as much as he can. Chad Clifton has partaken in numerous charities, including Backfield in Motion for the academic improvement of inner-city youth and the annual Packers Women’s .

The Green Bay Packers have recently signed Chad Clifton onto their team for another three years. We are happy to have you !