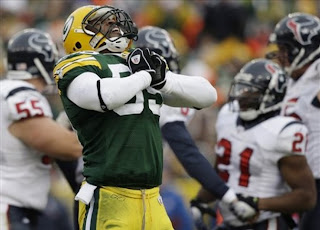 Desmond Bishop, also known as ‘Dez,’ was born and raised in . Bishop has always had a deep interest in community involvement, participating in the charity sporting events with Brett Farve and Al Harris, as well as making improvements to the ’s local shelter. Desmond is also very well rounded in literature and loves writing poetry and short stories.

His father had played football in college and professionally in the USFL, so it was no surprise when Desmond began to show great interest in the sport. After graduating high school, Bishop decided to attend junior college before joining on with the Cal Bears football team. At , Bishop started all 25 games he played in and led the Bears in tackles both seasons he played with them. Over his college career, Desmond earned multiple achievements including honorable mention from The NFL Draft Report and All-Pac-10 first-team accolades.

Upon graduation in 2007, Desmond Bishop was signed on by the Green Bay Packers in the sixth-round pick. The beginning of the season started off a little shaky, but toward the end of his rookie year Desmond began to hold his own. Bishop has continued to improve with each practice and is striving to be at the top of the Pack!