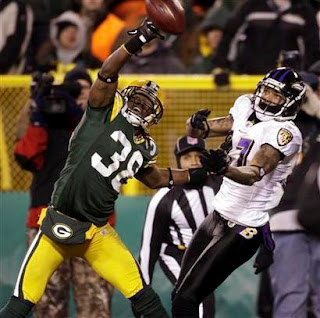 After a short stint with the Texans, Tramon Williams was signed on by the Green Bay Packers in November of 2006. To much satisfaction of the Packer coaches, Williams proved he belonged there in his first season with the 2nd longest punt return for a touchdown in Packer’s history. Tramon Williams was dubbed Special Teams Player of the Week and is ready to show his fans this season he has so much more to offer.

Williams turned 27 years old last week, so let’s us wish him a happy (belated) birthday!
Posted by Hot for The Pack at 9:08 AM