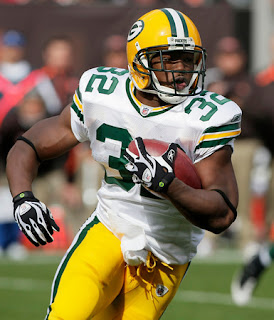 Brandon Jackson, a running back for the Packers, has been with the team since the 2007 NFL Draft. Before the NFL was even on the horizon, Brandon Jackson was a two-time Class 5A state offensive player of the year at his Horn Lake High School. Jackson was also named to the top 12 player list in the state of Mississippi.

Following his high school career, Brandon Jackson went on to play college football at Nebraska. At Nebraska, Jackson started the majority of the games and made a huge impression on his fans, teammates and coaches alike. This talent on the football field brought Jackson into his professional career with the Green Bay Packers in 2007.

With the Packers, Brandon Jackson scored his first NFL touchdown only three weeks in against the San Diego Chargers. Jackson also topped the 100 yard mark for the first time in his career shortly after. Jackson made such an impression, that he was voted the NFL Rookie of the Week. Brandon Jackson is ready to keep the momentum going this next season, so don’t miss out on a Green Bay Packers game!
Posted by Hot for The Pack at 9:04 AM