Getting funky with Nick Barnett

Green Bay Packers linebacker Nick Barnett has musical talents! In fact, his love for turntables, hip-hop, rap, pop, blues, and music mixing and paved the way for several business ventures. The first, Clarity Records, is Nick Barnett's own record company. The second, Traxx Squad, is his production company, both of which keep him busy year round. 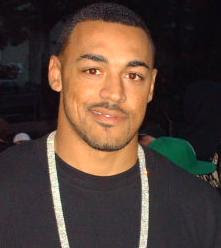 In June 2009, Clarity Records released the album "If This is the Mixtape, Imagine the Album" by artist Bee High from St. Louis, Missouri. Of course Nick Barnett was there to take it all in. It must have been satisfying for this former deejay to see his work pay off. It can take a long time for musical productions to get off the ground and Nick Barnett's seemed to fall into place.

Nick Barnett took his work a step further to bring music home. His Green Bay home now includes a full-blown recording studio! How cool is that?
Posted by Hot for The Pack at 12:28 PM