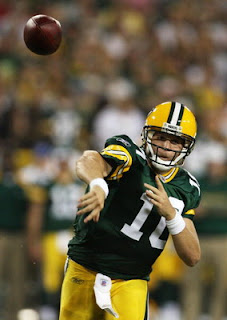 Green Bay Packers’ quarterback, Matt Flynn, was drafted in the 2008 NFL Draft right out of LSU. Matt Flynn signed a four year rookie contract on July 23, which will go through 2011 season. He is currently listed as the Packers' second string quarterback, having won the competition for the back up role to Aaron Rodgers. Although he was seen as less talented due to his smaller size than a few of his competitors, Aaron Rodgers still won the second string position, which was seen as the most exciting battle in tryouts.

Matt Flynn making the Green Bay Packers’ football team made his family proud. Alvin, Matt Flynn’s father, had been the quarterback in the 1960s at Baylor and had high hopes for his five children to become professionals. In High School, Matt Flynn was one of the top-rated quarterbacks in the state of Texas and had the privilege to lead his team to the 5A playoffs and to a semifinal appearance in one of the toughest classifications in Texas despite playing his last four games with a broken foot.

Before joining the Green Bay Packers, Matt Flynn need to prove himself on the LSU football team where he played at quarterback and holder on placekicks. Matt Flynn saw much success over his four years, slowly making his way up the ranks on the team. Flynn was given the opportunity to quarterback for the LSU Tigers at the 2008 BCS National Championship Game where he threw a 22 yard touchdown pass to win the game. Matt Flynn was the starting quarterback his senior year and led the LSU Tigers to a #1 poll position. Matt Flynn is ready to show his fans and the Green Bay Packers why they drafted him in the first place.
Posted by Hot for The Pack at 8:36 AM