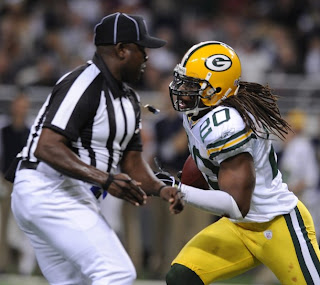 Atari Bigby was born and raised in Kingston, Jamaica. Before Bigby signed on as a safety for the Green Bay Packers, he played for the University of Central Florida, as a member of the New York Jets and as an undrafted free agent for the Miami Dolphins in 2005. Atari has played at every position on the field during his years as a high school football player, where he had the privilege of playing with future NFLers as well. Bigby was an all star player across the board, earning second-team Class 6A all-state honors and the opportunity to play in the Dade-Broward All-Star Game.

Bigby signed on with the Miami Dolphins in the 2005 NFL Draft as an undrafted free agent before being traded to the New York Jets. The Jets signed Atari Bigby on August 11, 2005 only to be waived in the final cuts a month later. The Green Bay Packers snatched up Bigby a few months later, and promoted him almost immediately to the active roster. Atari Bigby finally made his NFL debut on Christmas Day against the Chicago Bears.

At the end of the 2006 preseason, Atari was waived by Green Bay only to sign two days later to their practice squad. Once again, Bigby was signed to the active roster after a ten week period. Atari Bigby finally proved himself worthy during the 2007 training camp and preseason, replacing the strong safety at the time. Atari Bigby has been going strong with the Packers ever since and was offered over $1.5 million to return to Green Bay for the next season. In three days we’ll see if Atari Bigby decides to take the offer or signs on with another team.