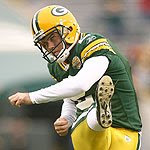 Mason Crosby is a placekicker for the Green Bay Packers who has made great strides in his first two years on the team. Crosby has posted more points than any NFL player in history during their first two seasons on a team, and continues to improve. Although Mason Crosby was drafted in 2007, he has already been named to the All-Decade team for the first nine years of the 2000s by The Sporting News. This feat makes Crosby the best collegiate kicker of the decade.

As a University of Colorado football player, Mason Crosby was considered the best kicker and named one of the Top 5 Seniors by position in 2006. Crosby was also selected as a First Team All-American for the 2005 NCAA Division I-A football season. Mason was Colorado’s all-time leading scorer by over fifty points, which made him the first Big 12 Conference player in history to be named player of the week eight times.

Mason Crosby was the 19th pick of the sixth round in the 2007 NFL Draft, where he was plucked by the Green Bay Packers. Crosby blew away the Packers in his first pre-season game when he kicked a 52-yard field goal. This was the longest field goal in the history of Heinz Field so he definitely made an impression. Crosby has been going strong with Green Bay ever since, and was even voted the Diet Pepsi NFL Rookie of the Week finishing the season with the highest-scoring in kicker franchise history.