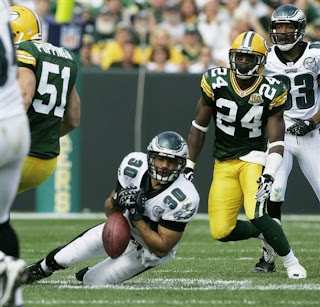 During his college career at Utah State, Jarrett Bush played in all games and started over half of them. As a senior at Utah, Bush earned the 2005 All-Western Athletic Conference honors when he recorded 50 tackles and two interceptions for the Aggies.

Jarrett Bush signed on with the Packers as an undrafted free agent in 2006. During his rookie season in 2006, Bush was given the nod to play in all 16 games despite joining the team just a week before the season opener. Due to his versatility on the field, Bush has found huge success and has solidified his position on the team Bush was offered a position on the Tennessee Titans last year, but the Packers decided to match their offer two days later.

As a young promising player who has steadily improved each year, Jarrett Bush is not a payer to miss out this season. Check out the 2010 Packers’ schedule to purchase your tickets soon!
Posted by Hot for The Pack at 1:45 PM