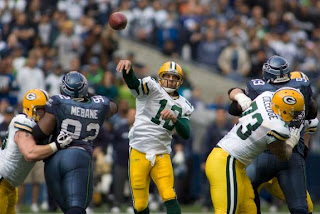 Aaron Rodgers is from the beautiful state of California and has made his way to Wisconsin for the Green Bay Packers starting quarterback position. Rodgers was picked out of the thousands in the first found of the 2005 NFL Draft by the Packers. Aaron Rodgers came fresh off his California Golden Bears college football team, where he had set several school records, including lowest interception rate.

Anyone who knew Rodgers had no doubt in their minds that he would achieve greatness in the sport of football. Even as a high school student, Aaron Rodgers set single-game records of 6 touchdowns and 440 all-purpose yards, as well as 2,466 total yards in a single season.

After attending Butte Community College for a few years, Rodgers was recruited by California who gave him the immediate starting quarterback position on their Golden Bears football team. Aaron Rodgers let the Golden Bears to much success, including a nearly undefeated season in his junior year. The only game California lost was closely contested, but Rodgers was still able to set a school record for consecutive completed passes with 26.

In the 2005 Draft Pick, Aaron Rodgers was thought to be the No. 1 pick overall. When brought on by the Packers, Rodgers needed to wait a few years under the Brett Favre reign before given the chance at the starting quarterback position. In the 2008 Packers season, Rodgers was finally given his chance and has been battling to keep ever since.
Posted by Hot for The Pack at 9:22 AM