Donald Driver is a Green Bay Packers fan favorite on Lambeau Field. I know I've cheered him on during many a game. However, Donald Driver intrigues me even more for what he does the off-field. Back in November 2008, Donald Driver released his first children's book, Quickie Makes the Team.

This 32 page fully illustrated book was inspired by his two kids and proceeds will benefit the Donald Driver Foundation which finds aid for the homeless nationwide. Talk about a great guy! 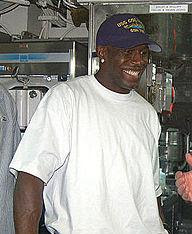 Players like Donald Driver really secure the Green Bay Packers' status as my favorite team. He is a star player and awesome to watch, but also steps up to help others in need. Skim the Packers roster and you'll find lots of stand-up players like Donald Driver. They're just a great team and they make Wisconsin proud to wear the green and yellow!
Posted by Hot for The Pack at 9:15 AM