Don't worry, folks. I'm not accusing Charles Woodson of any sort of crime though "oenophile" sounds rather shady. Instead, the term refers to someone who is devoted to the consumption and appreciation of wine. I guess most of my friends could be considered oenophiles, too. Is there any comparable term for a devotee of Jack Daniels?! Ha!

While you ponder that question, here's a photo of our pal Charles Woodson with a glass of his wine. 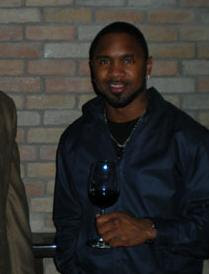 However, he's walking a fine line between advertising and not because the NFL rules against stars promoting alcoholic beverages. I have to say I like that policy. I'd hate to see Randy Moss sporting a shot glass and some rum all over the advertising section of my favorite magazines or Jared Allen chugging a beer on a billboard. At least Charles Woodson brings some class and education to this field.

I wonder if he broke out the wind recently to celebrate the birth of his first son, Charles Jr. I think a good white wine would be a sweet and light way to celebrate little Chucky's arrival!
Posted by Hot for The Pack at 10:37 AM