The Green Bay Packers rode into training camp on August 4 this year and I noticed how happy Ruvell Martin was about this situation. 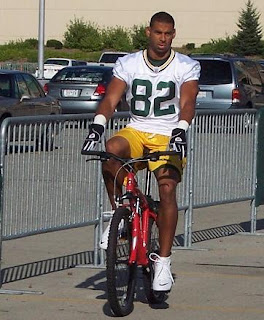 Ruvell Martin seemed uncomfortable while he pedaled the machine through barricades lined with overeager Green Bay Packers fans. (Sidenote: Did they need Green Bay Packers tickets to this event? Or was it free?) One of my coworker's friends attended the event and said Ruvell Martin was particularly annoyed because his bike wasn't green and yellow.

But I think I would also be annoyed if on my first day of work I was forced into the bright morning sun and ordered to ride a bike which felt a little small as fans shouted at me and thrust Sharpies and paraphernalia in my face. I can only manage my drive in if I have a coffee in hand and some soothing Kenny G on the radio.

Maybe if Ruvell Martin's biggest fans--wife and two children--showed up he might have had a better go of it. I think Ruvell Martin might just be happiest on his own two feet, racing down Lambeau Field instead of pedaling around outside on a smidge-too-small bike.
Posted by Hot for The Pack at 11:05 AM