Atari: A 38 year old company that pioneered in home video games including the popular Pong and Atari 2600.

Atari Bigby's moniker is a catchy one. It seems like sports athletes really have unique names down to an art form. Coco Crisp?! Come on! Milton Bradley? Is this the Monopoly company or the MLB player? Atari Bigby is just another in the long line of unusual names. It's pretty much the equivalent of Nintendo Jackson.

However, Atari Bigby's grandmother INSISTS he was not named after the legendary video game maker. Rather, she claims, his name hails from the Japanese term for warrior. Either way, it's an apt title. Atari Bigby is both a warrior and a football playing mastermind out there on Lambeau Field.

A friend of mine is a huge atari and Atari Bigby fan. I think his dream day would be to play atari with Atari Bigby...after watching the Green Bay Packers beat the Chicago Bears or Minnesota Vikings. He can dream, right? Sam, this one goes out to you. Enjoy: 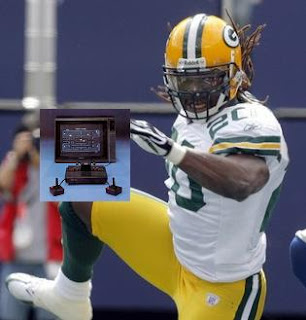