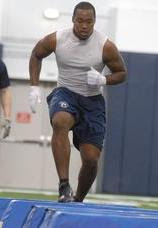 So let's do a fashion study of Danny Lansanah. Why not? I picked this photo because I think Danny Lansanah's fashion here is spot-on. We have a tighter fitting, sleeveless t-shirt to keep him cool while also giving fans like me something to see in his muscular arms! It isn't loose and baggy to get in the way and also accentuates his shape.

As far as the shorts, I think they're an appropriate length. We don't have the massive bagginess of XXXXXXXXL basketball pant-shorts and we don't have the nasty speedo-esque briefs of a cross country runner. Just a slight-above-the-kneecap pair in a tasteful navy blue.

I was a bit uncertain about the socks. Strike one--they're black socks. But, I think he pulls it off. Standard sock length back in my day was halfway up the calf. But I see that Danny Lansanah is sticking with the current times and keeping it low. Keeping it real. I like it.

Of course, the outfit could be improved if it were in Green Bay Packers green and yellow, but he sure earns points for coordinating with the blue mats at the bottom and in the background of the picture. I'm sure he tried that, right?

Lightbulb moment! Maybe pro-athletes would LIKE someone to coordinate their workout clothes?! Could I be hired for this? Official title: Personal Shopper for Training Clothes of all members of the Green Bay Packers roster. This could be a whole industry. Time to start researching!