Did you know Donald Lee spent his summers from the ages of 7 to 18 hauling logs with his uncle down in Pheba, Mississippi? Well, he did. Apparently that helped Donald Lee develop the strength and endurance he employs on Lambeau Field as a Green Bay Packers tight end.

I don't know about you, but hauling logs in a stifling Mississippi summer sounds about as close to torture as I can imagine, but Donald Lee found it to be a way to develop his character. I wonder if he'll make his kids--Donsha, 8, and Don Jr., 7--go through the same thing. Something tells me that he won't. I heard he has a pretty sweet house down in Pheba, Mississippi. And if he really wants to haul logs in his spare time, he can hook them up to his pride and joy: a 1979 Chevy truck pimped out with monster tires. Wait, I need a visual.

How do you like this log hauler?
And we need a quick Donald Lee pic to go along with that monster of a truck: 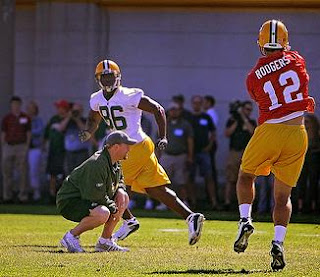