Meet the Cliftons. First up is dad, Chad Clifton. 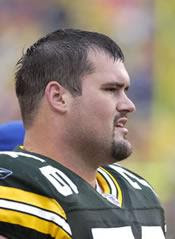 You may know him on Lambeau Field as an offensive tackle player for the Green Bay Packers, but to his kids, he's just dad. Chad is married to Candy.

I think this is her, but no big promises. Candy is a lawyer who passed the bar in 2003. The couple have two ADORABLE little boys with equally cute "C" names: Corbin and Cruz. Classy cool! Green Bay, Wisconsin has been home to the Clifton family since Chad Clifton was drafted by the Green Bay Packers in 2000. The family also spends a significant amount of time back in Chad Clifton's hometown in Tennessee. In his free time, Chad Clifton is way into hunting, remodeling, fishing, and snowmobiling. He's a real All-American guy in a real All-American family. Next time you head over to Lambeau Field, scan the stands for any sight of Chad Clifton's family. I hear they go to every home game to cheer on their family guy!

But I think Chad Clifton is a bit better suited for a spot on the Green Bay Packers roster than Peter Griffin...
Posted by Hot for The Pack at 11:39 AM