Professor Evan Moore? Sign me up for that class!

I was musing about Evan Moore the other day. Why, you ask? Well, friends, let me explain why you should be musing about Green Bay Packers tight end Evan Moore, too: This guy is s.m.a.r.t.

If you've noticed how he presents himself during press interviews, he might be one of the more articulate and eloquent NFL players I've seen. So, Evan Moore completed his undergrad work AND masters courses in just four years. While playing college ball. At Stanford. Are you as impressed as I am? Most people take 4 years for their undergrad plus an additional two for a full-time masters program. Clearly Evan Moore is genetically blessed with brains and brawn.

Better yet, Evan Moore is yet another dude on the Green Bay Packers roster who happens to be single. He lives out in California so probably has plenty of dating options, but with that kind of driven academic career, he might find the stereotypical beach babe a bit lacking in the brains department. I'm just saying.

In the meantime, I'll be thinking of taking Lambeau Field 101 with Professor Moore. At least Green Bay Packers tickets are cheaper than the tuition money most people fork out for more traditional classes! 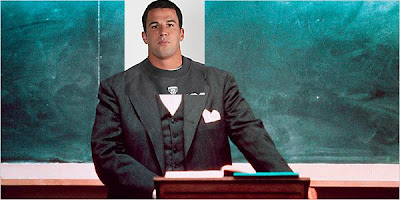 Class is now in session.
Posted by Hot for The Pack at 9:59 AM