Looks like Green Bay Packers quarterback Aaron Rodgers has found a new girl! He's been sighted out and about with Sports Illustrated model Julie Henderson since June 2009. This means he is following in the steps of fellow quarterback and model chaser Tom Brady with Giselle. Since Brady and Giselle are still together and are even expecting a baby, maybe things will work out for Aaron Rodgers and Julie Henderson.

I know you're curious to see what she looks like. I hereby present Julie Henderson. 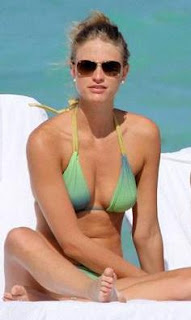 Must be a hard life to be so dang tall, thin, blond, and symmetrical.

Aaron and Julie. Sounds like a couple down the street, right? Well line this street with paparazzi and a few Escalades and we probably have a more accurate picture.

I'm thinking Lambeau Field might be a little prettier this season if Julie Henderson shows up to cheer on her Green Bay Packers boyfriend. Should we add her name to the Packers roster so she can get in without a Green Bay Packers ticket? I'm sure the other guys wouldn't mind.
Posted by Hot for The Pack at 9:24 AM