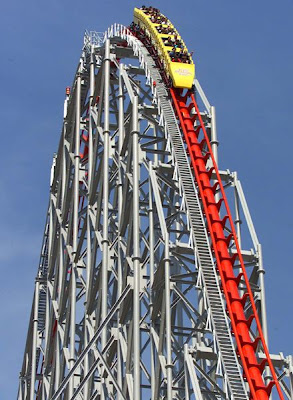 Brandon Underwood has definitely had his ups and downs over the years. He started off his college athletic career with the University of Ohio (a definite up). He redshirted in 2004, returned strong in 2005 (up!!), and then injured his shoulder and sat out the remainder of the season (down!! hiss!! boo!!). In 2006, he saw little playing time and meanwhile his studies were taking a hit (definite downer). Ultimately, he lost his athletic scholarship and chose to leave Ohio for Cincinnati (bad news, bears).

Definitely not an auspicious start for a future NFL-er.

It was here that Brandon Underwood seemed to turn things around. He saw lots of playing time on the Cincinnati Wildcats football team in all 14 games and was named first-team All Big East. Additionally, he was involved in the school's community service program where athletes speak about the importance of education to younger students in elementary and middle schools in the area. Quite the change from his struggles with academics back in Ohio!

The ups soon intensified. Brandon Underwood married his girlfriend, Brandie, and the two went on to have two sons, Cameron and Blake. He was drafted by the Green Bay Packers in 2009 as well. 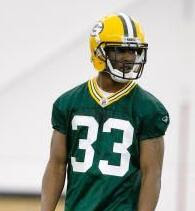 But, if you've followed local newspaper headlines, you know of a low point back in June for Brandon Underwood. He was accused to sexual assault against two women after a charity golfing event in Lake Delton, Wisconsin. I haven't heard a lot of follow-up of this story, so if you know the outcome, leave a comment.

Let's hope that Brandon Underwood returns to his high points this fall and turns things back around! He's got the potential and the skill to impress all his Green Bay Packers fans!
Posted by Hot for The Pack at 9:03 AM