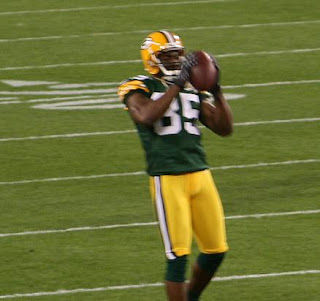 Did you know that Green Bay Packers wide receiver Greg Jennings loves to play bass guitar? Well, it's true. Plus he owns five different guitars so whenever he feels the urge, he can sit down and pick out a tune on any of them.

Though most of the music Greg Jennings favors is Christian gospel, he also likes the 1970s funk movement, especially songs with awesome bass lines and hooks like "Funk #49" and "Reflections."

I hope he has those fingers insured! Green Bay Packers games can be physically intense and gren Jennings' career depends on the health of his body, especially those fingers that wrap around the ball and haul in pass after pass. Now that I know he's so into bass and guitar, any finger injury would sideline his career and musical interests. I wonder if he's super protective of his hands, like George's model hands episode from Seinfeld. It would be hilarious if Greg Jennings started to baby those money making hands--refusing to do chores, getting weekly manicures, and holding them aloft so the blood doesn't pool.
Posted by Hot for The Pack at 9:42 AM