Georgia is a beautiful state and the one that Morgan Burnett calls home.  Burnett hails from College Park, Georgia, a town of roughly 13,000 that straddles two counties. 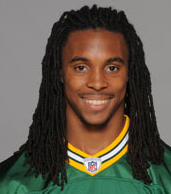 College Park has produced many well-known people for being a relatively small town.  Of course Morgan Burnett is on that list, as well as R&B singer Monica and Tameka Cottle, TI's wife.  It seems especially to have lots of musicians and athletes coming out from its ranks.  Pretty cool.

Morgan Burnett didn't have to look far for his college experience.  He attended Georgia Tech and had a strong football career.  And I'm guessing that he'll retire in his hometown state though I hope that day doesn't come for a long time.
Posted by Hot for The Pack at 8:47 AM