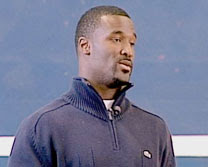 Any 18 year old college guy who cares about making the college football team is going to try and impress his future teammates, right? Doesn't matter if he's loud, shy, talented, or not. When you first make the team, you need to prove your worth.

It all happened on the first day of weight room training when the guys headed down to their macho playground--the weight room. The weight room is often the place of male showdown and bravado, and this day was no exception. James hopped onto the bench, loaded up the weights, and earned the admiration of his new teammates. He bench-pressed a whopping 225 pounds 16 times without seeming to strain! The guys were awed. Shocked. Flabbergasted.

Shortly after this, he was dubbed Dingo in honor of professional wrestler Dingo Warrior. 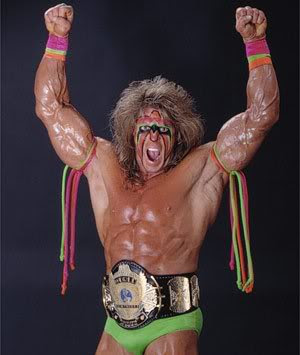 I wonder what he thinks about the nickname...and that guy's arm ribbons...
Posted by Hot for The Pack at 11:45 AM