1. He likes having a good time and watching sports with friends (see the baseball on the TV behind his buddy?).

3. His middle name is Clayton.

4. He currently resides in Baton Rouge, Louisiana (at least according to the official Green Bay Packers website).

5. A lot of people think he looks like Matt Damon. 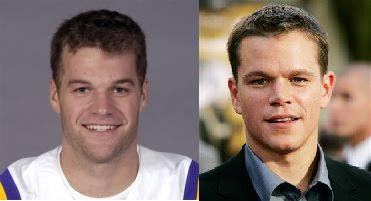 7. The most expensive Matt Flynn card on ebay currently retails at $19.99.

9. He was born on June 20th, which is also my cousin Matt's birthday (though cousin Matt is 9 years younger).

10. He attended Robert E. Lee High School which flew a Confederate flag up until the 1960s.
Posted by Hot for The Pack at 10:57 AM