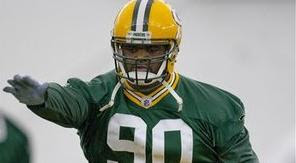 Jarius Wynn, aka number 94 on the Green Bay Packers, has a closely connected family. He spent his summers in high school and college building houses with his dad and the two are very close.

Moreover, Jarius Wynn's extended family is pretty tight knit. He has much in common with two first cousins: football! Garrison Hearst, Jarius Wynn's older cousin, was an All-America pick at Georgia and then the third overall draftee by the Phoenix Cardinals back in '93. Another cousin, Shedrick Wynn, also played at Georgia for several seasons.

And Jarius Wynn has started his own family. Though he isn't close to the baby mama any more, he still takes part in his two-year-old son, Jeremiah's, life. The favorite activity of the father son pair? Sponge Bob Square Pants, of course.

The Green Bay Packers are a new team for Jarius Wynn but by this point he's pretty settled into the team and Lambeau Field. I wonder if his dad, cousins, and son head up to Green Bay for the games or if they wait until the Green Bay Packers plays in the south. Either way, I'm sure they're glued to the TV set for any games they cannot catch--in between epsidoes of Sponge Bob Square Pants, I'm sure.
Posted by Hot for The Pack at 11:54 AM