The city of York, Pennsylvania is where Green Bay Packers fullback John Kuhn lives year-round. Well, I have a friend who lives in the nearby Villa Green neighborhood. She was out getting coffee this summer in a local bistro, when out of the blue came John Kuhn in to buy a drink. He looked pretty much like this, minus the sweat and jersey. 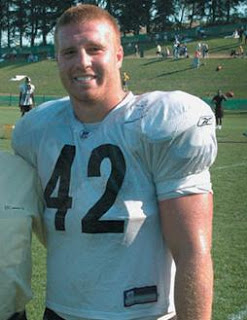 She said he was wearing a blue polo, khaki shorts and flip flops. Fortunately, she is a huge Pittsburgh Steelers fan and even though he didn't see lots of playing time, she was familiar with his face from occasional TV shots and his Steelers bio online. I'm not sure how much recognition he receives out on the east coast, so she said he seemed pleasantly surprised when she told him she was a fan. She had to leave quickly, but it made her day to see him in person--and it made mine to hear all about it!

I reminded her that John Kuhn is single, and according to pictures he's pretty cute. She said he is...but that old engagement ring on her finger is a pretty big barrier to any romantic involvement!

Green Bay Packers fans are lucky to call John Kuhn one of our own and though we probably won't bump into him at a coffee shop, we can get as close to the sidelines as we want by picking up our Green Bay Packers tickets any time.
Posted by Hot for The Pack at 12:08 PM