Introducing Graham Harrell, our new Green Bay Packers back-up quarterback, acquired by the team as a free agent in 2010. 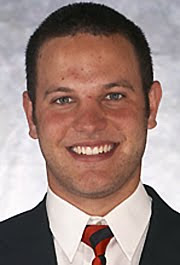 Saskatchewan Roughriders on the left versus Green Bay Packers cheesehead on the right. Green machines!
Anywho.

Graham Harrell was released in April 2010 from the Canadian league and has now made his way into the Green Bay Packers camp. If this doesn't work out for him, he can always go back to coaching! Rumors were flying back in 2009-2010 that he had lined up a coaching job for the 2010-2011 season. Specifically, news was released on January 22, 2010 that he had accepted a coaching position with Oklahoma State University.

So whether he makes the cut and plays with the Green Bay Packers this season or opts to work with Oklahoma State University football team, Graham Harrell clearly has some form of football in his future plans!
Posted by Hot for The Pack at 8:59 AM