Brad Jones is clearly an athletic guy.  So much so, in fact, that he can pick up sports right and left.  Football is clearly covered, but did you know he was also a sprinter on the track and field team?  Yessirreebob.  Brad Jones competed in the 200 meter dash and the 110 hurdles with ease.  Additionally, he spent a year on the basketball team.

But it wasn't until 2011 that Brad Jones gave another athletic endeavor a try: surfing.  This is something I've always wanted to do.  The thought of riding huge waves in a tropical setting sounds like a great way to spend the afternoon.   Brad Jones got just that chance and though I wasn't there to witness it (darn!), I'm certain his natural athletic abilities served him well. 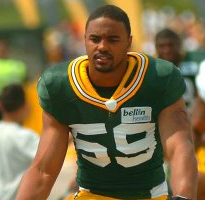