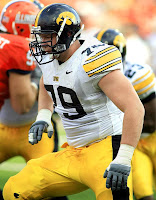 Bryan Bulaga was born March 21st, 1989 in Crystal Lake, Illinois. Bulaga played football for Marian Central Catholic High School and went on to play college football at the University of Iowa. In college, Bulaga was dominant from the beginning. He was named Freshmen All Big Ten and was on the 2009 Outland Trophy watch. After his junior season, Bulaga declared for the NFL Draft. He was selected by the Green Bay Packers with the 23rd pick in the draft of the 1st round. Bulaga will spend this season competing with veterens Chad Clifton and Mark Tauscher for playing time at the tackle positions.