We're Not in Kansas Anymore Jordy! 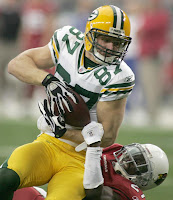 Jordy Nelson grew up in Riley, Kansas and went on to play at Kansas State University. Nelson is a spectacular athlete who holds the Kansas 3A 100m dash record. With the 5th pick in the second round of the 2008 NFL draft, the Greenbay Packers drafted Jordy Nelson after his monster senior year in which he caught 122 balls and scored 11 touchdowns. In 2009, he caught 22 passes for 2 touchdowns. To be quite frank, Jordy isn't really a factor for the Packers. Mostly because of the amount of depth that the Packers have at wide receiver. He tends to struggle against elite competition. Most notably when he's faced with the daunting task of playing against the stronger and far superior Minnesota Vikings. Just kidding Packer fans!
Posted by Hot for The Pack at 9:36 AM