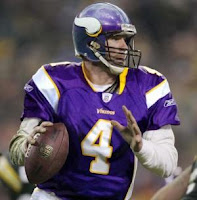 The game between the Minnesota Vikings and the Green Bay Packers at Lambeau Field. There's nothing better than seeing Brett Favre playing against the Packers again. Plus he's pretty cute for an old man!! The Vikings won both games last years but the Packers have had another year to grow with quarterback Aaron Rodgers. Expect the Packers to maybe sneak out a win this year against the men in purple. Buy tickets to that game at Ticket King!!!